A sunny Easter Bank Holiday Monday. The perfect time for a local cup final.
After a trip up to the Midlands in the morning, it was back to Ardley for the Jersey Cup Final between Banbury & District Premier League Champions Bishops Itchington and Second Division side, Bicester Hallions who had recently secured promotion to Division One and won the Mid Oxon Cup Final.The Background
It was Premier League side Bishops Itchington who had had the easier route to this final. They started with a bye, before easing past Divison Two outfit Hardwick Sports, 4-1 away from home. This was followed by a crushing 8-2 home defeat of Division 1 side Hornton, followed by a 2-1 away win at another Division 1  team, Halse United in the Semi-Final.

Hallions’ route saw them take on Division 3 winners Brill United, triumphing 6-3 away from home. They then had to face three other Premier League sides, Woodford United at home (6-1), Chasewell Park away, winning 4-3 on penalties after a 2-2 draw and finally a 3-2 home Semi-Final victory over Deddington Town.

So, as the Premier League outfit, Bishops Itchington were favourites before kick-off. However, having already put out three Premier League sides, Hallions were unlikely to be phased by another one, even if they were the champions and current Jersey Cup holders.

Line-ups
​The Game
Itchington start the game well and have the first two chances. In the second minute they try an audacious effort from the halfway line that evades the Hallions keeper but just fails to hit the target. A few minutes later a crashing drive from way out again beats the keeper but smacks against the bar and away to safety.
After four minutes, however, Hallions took the lead when Dan Sweeney was left with a gaping goal to slot the ball into. 1-0
The goal galvanised Hallions and they started to take control of the game. On 13 minutes we were treated to a goal worthy of gracing any football pitch at any level. A free-kick in a central position, just inside the Bishop’s half was floated into the box way to the right of the goal. Stuart Bridges ran onto the ball and produced a stunning volley, over the keepers head and into the far corner, reminiscent of Marco van Basten’s famous 1988 European Championships effort. 2-0.
Bishops Itchington weren’t about to go down without some sort of fight though and, on 20 minutes, they pulled a goal back when Jamie Simpson got a glancing header onto a left-wing free-kick. The ball went in off a Hallions defender but, as it was already on the way in, it will certainly be credited to Simpson.

A glorious afternoon in Ardley
​It didn’t take Hallions too long to re-establish their two goal lead when, on 27 minutes, a mishit goal kick fell straight to Dan Smith who made no mistake, slotting past Adam Bourton to make it 3-1.

Bicester remained on top in terms of possession. Bishops Itchington never lacked effort but were second to the ball on most occasions. Then, with three minutes to go until the break, some superb defensive work from Bridges, curtailing an Itchington raid before calmly taking the ball past a couple of challenges. The defender then played a ball over the top of the Bishop’s defence. Dan Smith was first to react, out-muscling his marker before lobbing the on-rushing Bourton. 4-1HT Bicester Hallions 4 Bishops Itchington 1. A dominant first-half display from Bicester but will the slope and the heat make a difference in the second-half? 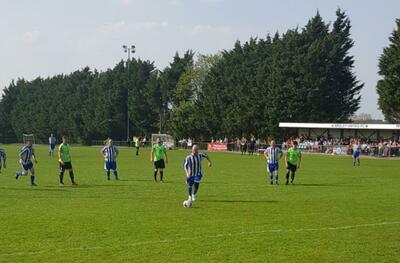 ​Maybe it was more the conditions and the 4-1 lead than the slope on the pitch, but Bicester were certainly more lacklustre at the start of the second period, allowing their opponents a far greater share of possession than in the first half. To be fair to both teams though, it was a very warm day.
However, even with more of the ball Bishops Itchington failed to take advantage, apart from once again hitting the Bicester cross bar. This was matched by Hallions when Dan Smith was inches from grabbing hat-trick when his header struck the woodwork.Hallions did finally make a further breakthrough when they won a penalty in the 82nd minutes. Bridges stepped up but Bourton guessed correctly and made a good save. Unfortunately for the Itchington stopper, the ball ran straight back to Hallions man who made no mistake with the follow-up. 5-1

There was still time for Bishops Itchington to get a very, very late consolation when Kostiuk made it 5-2 but it was Bicester’s day and shortly after the restart the referee blew his whistle for the end of the game.

FT Bicester Hallions 5 Bishops Itchington 2. A well deserved and fairly comfortable win for Hallions, completing what has been a very successful first season. Promotion and two cup wins and the first time a Division Two side has won the Jersey Cup. Not too shabby.

The Gaffer is attempting to run the Oxford Half Marathon

Another feast of football yesterday saw our pre season come to a close.

Leave us a reply